Tonight I decided to buy a used computer workstation off eBay! I navigated to the search bar at the top of the web page and, in the extremely short window of time that existed after typing the word “used” and before typing “thinkstation”… 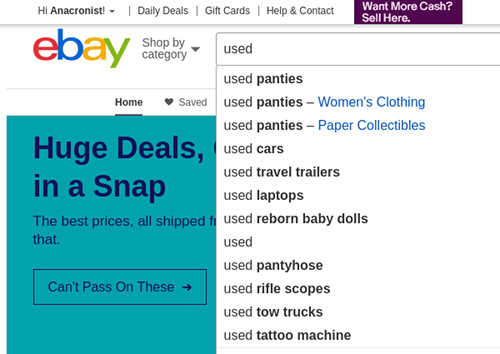 WTF is this?!? This is my business eBay account—typically all I order with it are computer parts and computer related equipment. How did we veer onto this path? The only possible explanation is that A LOT of people are searching eBay for used panties.

This is an unsettling idea on its own, but what is going on with some of these other autocomplete recommendations? “Used reborn baby dolls”? “Used pantyhose”? “Used rifle scopes”? “Used tow trucks”? “Used tattoo machine”???

What is a reborn baby doll? That sounds creepy as hell. And used tattoo machines? Judging by the number of shitty tattoos out there, tattooing is more popular than ever so lots of people must be getting into it. A used tattoo gun is certainly going to cost less than a new tattoo gun, in very much the same way as a used toilet seat will cost less than a new one off the shelf at Home Depot.

Buying this computer should have taken me 20 to 30 minutes, but I ended up getting sidetracked for almost two hours. Crazy shit like this makes me wonder about all kinds of things… like how there is a team of software engineers at eBay—each member making six figures a year and having completed somewhere between four and nine years of higher education—ensuring people who are searching for “used panties” have as smooth a shopping experience as possible. This is all because increasingly impatient customers are more likely to get frustrated if they have to type in the entire search term and will happily buy used panties at Amazon instead.