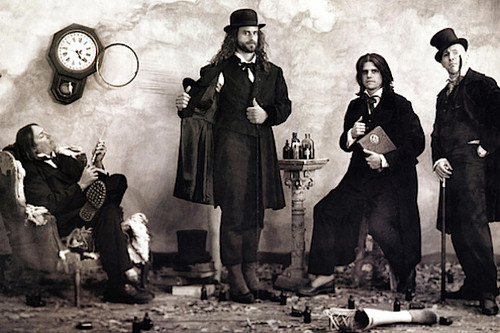 Here are the runtimes for the non-noise tracks from Tool’s new Fear Inoculum album: 10:20, 11:53, 12:44, 13:37, 10:05, and 15:43. This means that the average song length is somewhere around 12 minutes and 24 seconds, which equates to the time needed for modern radio to play four complete songs. Another way of putting it is that these six Tool songs roughly translate to 24 Katy Perry or Blake Shelton songs.

I find it humorous that, when describing the album, many fans and critics are making statements along the lines of, “The songs don’t seem nearly as long as they really are!” This is a very peculiar sentence. I mean, what the hell does that even mean? It’s sort of like saying, “I was at the DMV for an hour and a half, but the door greeter was very sweet and made it feel like 20 mins.” Or, “I was sick to my stomach for four hours, but somebody brought me a ginger ale and then it seemed like only a fraction of that time.” Or maybe, “I dropped a bowling ball on my foot, but the cast they put on my leg was so great that it hurt for just three days afterwards!”

The point is, this is a statement a person would make to describe an experience where something unpleasant was happening, but there is a counteracting element that lessens the severity, or takes the edge off. In this case, six obscenely long and occasionally floundering songs somehow feel abbreviated, because… well… because it’s Tool! This is the band that made Opiate, Undertow, Ænima, and Lateralus!

As for Fear Inoculum, what’s the real verdict? Is it bad? No. Is it unremarkable? Yes—there really isn’t anything here that hasn’t been done better on the band’s previous albums. It hosts some nice sounds and textures, and never gets very rowdy. One of my close friends said it’s “pretty chill” and I will get on board with her assessment.

If they had churned this out 12 to 18 months after 2001’s Lateralus then there would be much to celebrate: it would be a triumphant exercise in writing and recording for a band that, even at the time, was notorious for taking too much time between recordings. However, it’s been a mind-blowing 13 YEARS since their last release and a staggering 18 YEARS since their last proper LP!

No dice, no pass… no fucking way.