ZZ Top bassist and supporting/co-vocalist Dusty Hill passed away last Wednesday. While he lived a good, full and productive musical life (and I would expect in general), it still hurts to know he isn’t around anymore. The three men from the world’s most seasoned power trio had been together for more than fifty years. And though it seemed like it could never happen, now the legendary Little Ol’ Band from Tejas is down to two of its three original members. 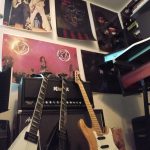 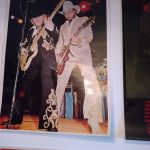 I took a History of Jazz & Rock class back in my first year of college (and last year of high school). One day, early on in the semester, our professor asked everyone which band, act, or group had been together the longest without having lost, fired and/or replaced a member(s). Was there any band that had lasted more than 20 years, 25 years, 30 years..? I don’t remember exactly how it all went down, but either he gave an answer of his own or he presented the question to all of us; regardless, the correct answer was never given. I recall leaving class that day feeling that something huge was just missed by everyone, and possibly by our music teacher too, and it’s something that stuck with me for quite some time. Eventually I was able to piece it all together and realize it was because the name ZZ Top—at this time well short of its eventual 51 year run which ended with Dusty passing—was actually the right answer. No other band came anywhere close, then or now.

In fact, not only did the band’s name never come up that entire class period, I don’t think it came up once the entire semester. This is probably not surprising though: ZZ Top is one of those bands that pretty much everybody likes, but most have no concept of how much depth actually exists to the band, its members, and their sound. Usually they’re regarded a goofy blues-rock band that wrote the mega-hits La Grange and Sharp Dressed Man, released the 10-million-plus-selling blockbuster Eliminator in the early 1980s, and somehow were always on the road touring with a distinctly fun-loving stage presence. Yet for a small percentage of the band’s listeners, we go absolutely ga-ga for ZZ Top and are laser-focused on the unassumed complexity that exists. Even a smaller chunk of these people understand that ZZ Top was an established supergroup the instant they also became a regular group. Billy Gibbons is a fantastic frontman and wonderfully talented musician, but don’t doubt that both Dusty and Frank are musically loaded for bear.

In particular, it’s easy to argue that Dusty had the best set of pipes in the band. Listen to him belt out his lines in the song Ten Dollar Man off 1976’s Tejas, or the call-and-response with Billy on Beer Drinkers & Hell Raisers from 1973’s Tres Hombres. While he always provided backup vocals and harmonies, Dusty’s vocal prowess was featured less in the 1980s and beyond, but he still could sing like few rock musicians can. The most immediate analogue of to Billy and Dusty I can think of is the supergroup Band of Gyspys with Buddy Miles’ vocals taking a backseat to Jimi’s: Jimi was typically up front singing, but Buddy would still let it rip or take on full duties for a song.

I guess the point is that having Dusty Hill as your backup singer is like having a flamethrower as a secondary weapon to complement a sawed-off shotgun. Plus he was one-half of the rhythm section in a widely accomplished and celebrated blues-rock band that somehow held things together for more than half a century. It’s impossible to describe how meaningful that is….

The pictures above are of an original 70s-era ZZ Top poster hanging in my music room with Dusty and Billy making it happen. Maybe it’s odd to see the guitar duo surrounded by heavy metal bands, but it shouldn’t be—you better believe that ZZ Top is as heavy as it gets.

(track 03 from the Tres Hombres LP by ZZ Top

Heard It on the X

Eddie Van Halen passed away this last week, which left me feeling much the same way I did back when Michael Jackson passed in 2009. These were two larger-than-life individuals and the world feels quite a lot emptier without just one of them around, let alone both. 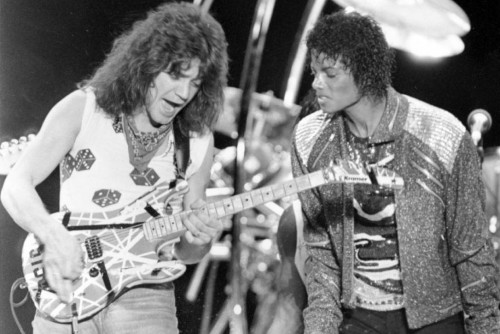 Like a lot of people, I formed a close association between these two musicians when they briefly crossed creative paths back in 1982, with Eddie contributing a shred guitar solo on the song Beat It from Thriller. This was my favorite song as a kid, and greatly influenced my musical tastes later in life. The album 1984 came out shortly after and was a potent blend of 80s pop mixed with hard rock/heavy metal. It also made a strong impression: there is no question that heavy, guitar-driven music infused with synthesizers is my happy place.

It just so happens that I recently ordered a pair of new JBL 308p monitor speakers for my music room and, in a wistful moment after setting them up, decided Beat It would be the christening song. I have always tried to not be an audio snob, but the audio clarity of these speakers is really is a cut above your average audio system. One thing led to another and I found myself binging Michael Jackson albums, particularly Dangerous. To say the album is wonderfully mixed would be an understatement—it has oodles of ear candy sprinkled on every track. (See if you can spot the use of silence as an element of percussion in the main riff/beat of Can’t Let Her Get Away.) 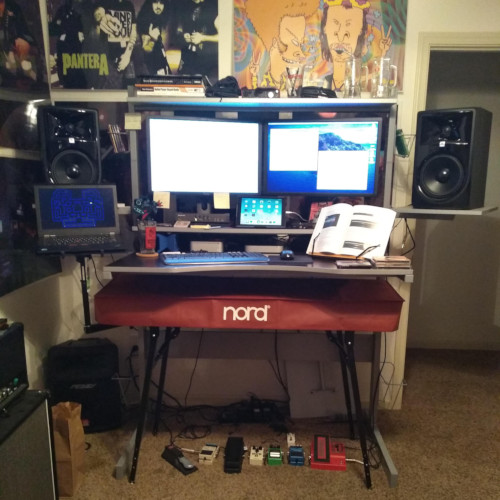 Something I have always noticed about this album is that eight tracks have the same general orchestration, aural presentation, and attitude/vibe, yet these are interrupted by six very different songs that are comparatively “out of left field,” as the saying goes. Heal the World, Will You Be There?, and Keep the Faith are uplifting songs but stylistically clash in pretty much all ways with the rest of the record; Gone Too Soon is a slow pop ballad with completely unique instrumentation; and Black or White and Give in to Me are two guitar-driven rockers.

I started to wonder how Dangerous would sound if these sonically incompatible songs were made absent during another spin of the album. I was surprised and pleased to find that removing them resulted in a “new” Dangerous that is made up of the following eight songs: 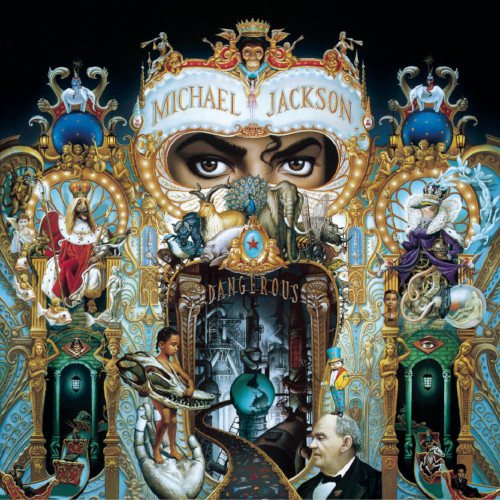 The result is a leaner, meaner, and much more potent album that appropriately highlights the new sonic frontier that Michael Jackson was exploring in the early 90s. What’s also interesting is that these eight tracks weigh in at 43:47, which quite nicely fills out a 46 minute vinyl record. Perhaps with the growing popularity of CDs, Jackson’s record company pressured him to arbitrarily inflate the size and scope of the Dangerous project? (Note that the actual length of Dangerous is 77:03, and a CD is capable of holding 80:00, so this seems quite plausible.)

How much more musically impactful would this era of Michael Jackson have been if the “extra” tracks were released as EPs instead: the three uplifting tracks for one release, and the two rockers for another? Maybe Gone Too Soon could have been released as a single, or honestly… just released as a B-side to a single for Will You Be There?, or discarded outright. It’s not a bad song, but also doesn’t really offer anything on its own.

One thing is for certain: I’m never listening to Dangerous in its original presentation ever again.

Also interesting is that Dangerous: Expanded Edition was planned for release some time back, but somehow never surfaced. It makes me wonder if there are other tracks in the style of the eight above that have never seen the light of day. If so then this would be incredibly unfortunate, and hopefully would be fixed in the future.

Anyway, sorry Eddie—I’m gonna miss you and you certainly deserve the spotlight right now. For some reason this peculiar digression was necessary for me to deal with your loss, but I will atone tomorrow by blasting Fair Warning and 1984.

Hopefully the other side is as dazzling to you as you were to us here. @ 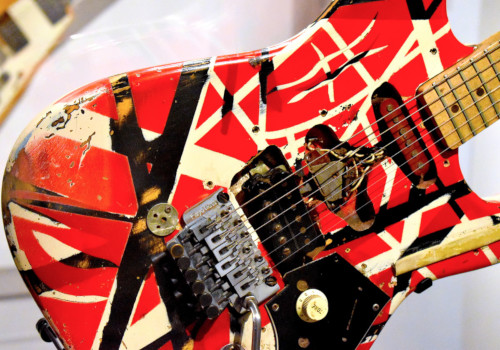 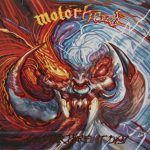 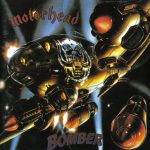 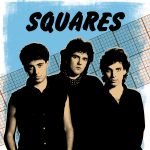 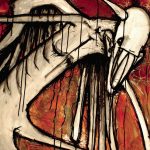 I spent my entire afternoon and evening adding CD information to the online MusicBrainz database for two Motorhead albums, one Squares/Joe Satriani album, and one Converge album.

What does this mean?
It means the next time somebody tries to rip these albums to a computer, album and tracklist information will populate automatically when the person would have otherwise needed to enter all of this information manually. (Or possibly have the abcde command-line program crash, which is what happened in my case.)

Why did this take so long?
Because it was done using the MusicBrainz Picard and abcde programs within the new version 8.2 of CentOS Linux.

Why is this relevant?
Because the new digital world spearheaded by Spotify sucks—a lot—and it could be so much better. In the meantime, I will keep my music to myself, thankyouverymuch.

Anything else?
Sometimes when working with Linux, a person feels a very peculiar twinge of productivity mixed with nonproductivity. This can happen when a lot of time and effort is spent performing what would most likely be a routine task on a commercial operating system such as Mac OSX or Windows. On the bright side, there are always important and valuable lessons to be learned on technical excursions such as this one. Plus, a glimpse is occasionally stolen of how things might actually work better.

If you’re anything like me, you regard Spotify, YouTube Music, Amazon Music, etc. as giant steaming piles of horse shit. If you’re more like me, you also still buy your music on CD and then rip it in a lossless format to your computer (or purchase albums from Bandcamp

and download FLAC versions of the songs). And if you’re even more like me, you also run Linux as your primary operating system and refuse to grant conniving technology companies like Apple and Microsoft dominion over your music library. 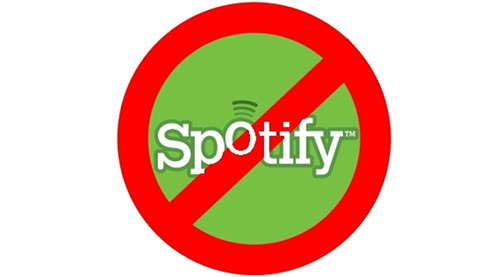 Enter the command-line utility abcde, which is an acronym for A Better CD Encoder. This program previously defaulted to FreeDB to obtain CD artist, album name, and track title information, but sadly this service shut down back in June. This leaves MusicBrainz

as the next best alternative, but unfortunately abcde hasn’t been updated yet to reference this different database, which effectively renders its music database lookup features unusable.

So if you’re running CentOS 8, follow the steps below to activate the MusicBrainz database for abcde. (These steps will be similar for previous versions of CentOS and other RHEL-derived distributions.)

Also, if you haven’t done so already, delete Windows and install Linux. You’re going to have to do it eventually—yes, really—so might as well get it out of the way now. Don’t worry… it’s free, and also better in every conceivable way except for handholding….

Also, make sure your ~/.abcde.conf file is updated to reference MusicBrainz and configured for FLAC output (or Ogg/Vorbis if you prefer).

And now you’re ready to roll! Piece of cake, right? No..? Well, it’s still worth all the hassle because you will be able to burn CDs to your Linux machine in glorious lossless quality, with full album details, and also keep the grubby fingers of the many crooked schemers at Apple and Microsoft off of your precious music.

for abcde will eventually be updated to reflect these changes, which would make the instructions above obsolete. If not then I might be writing a related but very different blog post in the future.