In the house where I spent my most formative years, we always put the toilet paper roll on the holder in an “over” position: where the sheets of paper would dispense from the top of the roll and not the bottom. Not surprisingly, I held strong convictions that “over” was the only correct way to hang toilet paper. 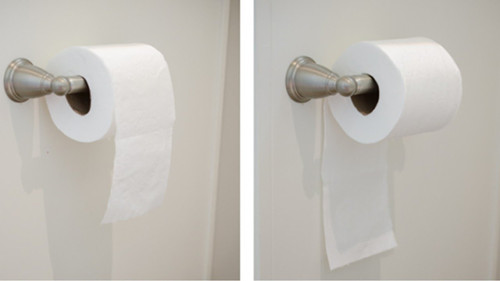 When I would visit friends’ homes in my youth, I found that some of them put their toilet paper in the “over” position and others put it in the “under” position. This was confusing to me, because “over” was so obviously right and “under” was so obviously wrong. For my friends’ families who did it this other way, I started to wonder what else might be off about them: hanging their toilet paper the “wrong” way made me suspect other flaws in their character.

As I matured, lived in different houses, and had roommates, I became more tolerant of toilet paper being hung in the “under” orientation. It was still an odd experience, but I came to accept that the preference people have for hanging toilet paper is just one of the many ways we are all unique from one another. Maybe there wasn’t anything wrong with the “under” people after all?

Some time later, I rented a house with an extremely small bathroom, and the toilet paper holder was placed surprisingly close to the toilet. After a few months of being angry at the suboptimal use of space in this bathroom, I had an epiphany: if I oriented the toilet paper in the “under” orientation, the end-sheet would be farther away from me which would create more space between the toilet and would thus be easier to grab! To my astonishment, from that point forward I found myself putting toilet paper on the “wrong” way in my own house!

These days, it doesn’t really matter to me what orientation is being used: I’m comfortable with both. I have found, however, that if the holder is too far away then the “over” method wins, and that if it is too close then the “under” method wins. In both cases, the objective is utilizing the available space as effectively as possible.
(I just checked both of my current bathrooms, neither of which have space issues, and the toilet paper is unsurprisingly in the “over” orientation.) I also would expect that a person’s dominant hand and the side of the toilet the holder is located could be another factor. There are different sized toilets too, which is something I never bothered to notice until recently!

Perhaps in the case of toilet paper roll orientation preferences, subtle practicalities establish lifelong habits. Also, one person’s toilet paper habits can easily transfer to impressionable youth in a shared living space, and when they grow up they will most likely continue to do what is familiar without ever really understanding the reasons why.

Oh… and there is a third option that not very many people know about: spear the toilet paper through the secondary axis and make it as difficult as possible to use. This is particularly effective when somebody gives you a hard time

for putting the roll on the “wrong” way. 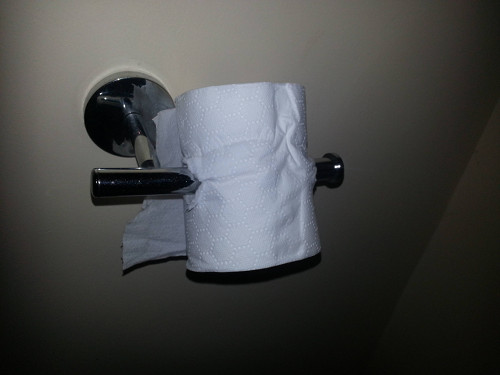 As I was listening to this podcast, I thought to myself, “Wow, these descriptions of our current social climate are highly articulate, accurate and on point.” But the more I nodded in agreement, the more I felt exhausted by the conversation. It then occurred to me that all this fantastic dialogue basically amounted to an overblown conversation about how people are behaving as badly as they ever have, just in new and increasingly nuanced ways.

I began wondering if much of this poor behavior is symptomatic of the need we all have for more time and space to exist as ourselves in this busy and cramped world of ours. If it helps to identify as a furry

and file an HR complaint with your company because there aren’t litter boxes in the restrooms [!] then more power to you! If a man with a penis (because now this needs to be qualified) can feel better about his life by claiming he is a lesbian [!] and then have his claims legitimized by others [!!], way to go! If throwing somebody else under the bus for a minor social gaffe helps prevent your own character from ever being drawn into question, hell yeah—go for it!

The more things change, the more they stay the same. There is a certain kind of person right now who has more easily adapted to society’s current round of shuffled priorities: this person masks his or her own poor behaviors by going on the offensive and preemptively attacking everyone else for their own mistakes and shortcomings.

American philosopher Peter Boghossian and mathematician James Lindsay expose how non-STEM academia publishes papers in academic journals where conclusions are made first and then data is invented to support and advance progressive narratives.

. This occurred around the same time that the FBI reported that it had failed to substantiate claims of sexual assault/misconduct made against Judge Brett Kavanaugh, claims which were an attempt to interfere with and possibly derail his appointment to a lifetime seat on the supreme court. 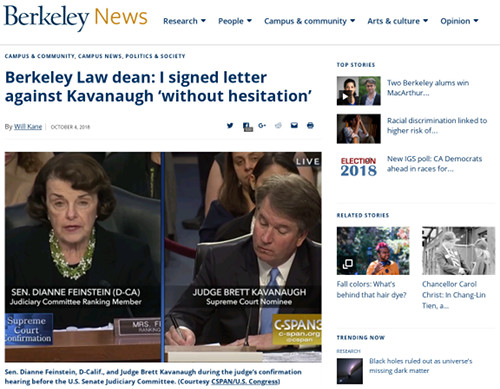 It’s hard to see how this is news. In fact, the only thing that’s even remotely remarkable about it is that somebody felt like this was news. A UC Berkeley law dean publicly stating her opposition to a republican supreme court appointee is like a stoner proclaiming to the world his profound affinity for Krispy Kreme donuts

—it’s just a declaration of the obvious and is silly and unnecessary.

It would be like if I posted a press release on ChadSpace with any of the following headlines:

You know what would be news? If a UC Berkeley law dean publicly stated her support for a republican supreme court judge nominee (and to be fair, let’s say it’s one with a less questionable history of hard drinking and reckless partying). It is impossible that this would ever happen though. Or if it somehow did happen, this make-believe person would certainly not be working at the university for much longer.