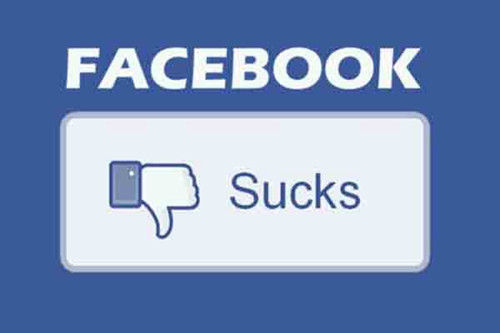 The other night, I was grooving to the song High Voltage

by AC/DC. It’s a killer track from the band’s classic era and has some very simple but wickedly clever (and catchy) vocal harmonies in the chorus. For the uninitiated, the band’s original singer, Bon Scott

, was a truly amazing performer. His voice lives in the higher registers and, like many aspects of AC/DC’s early music, what he sings is deceptively complex.

I have always had good vocal control, but hitting higher notes, particularly in Bon Scott’s range, has generally been difficult for me. Over the last couple of years, I have worked a lot on my singing and have gained a lot of ground. So… inspired in the moment and feeling confident, I opened Google Chrome on my smartphone to pull up the lyrics to the song so I could follow along and lead appropriately in to those really high “high voltage!” lines in the chorus that are so difficult but satisfying to hit.

I typed in “High Voltage lyrics” and was a little pissed to find that a different song with the same name came up from the band Linkin Park: 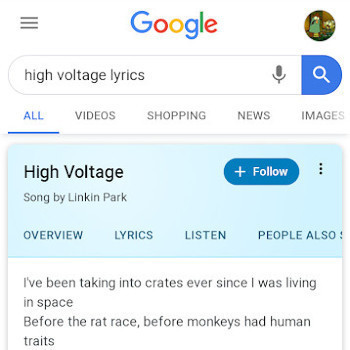 This is not even one of Linkin Park’s more popular songs, nor was it a single, yet it’s favored in search results over AC/DC’s High Voltage!?? I understand times change, and fads come and go like the turning of the tide, but something ain’t quite right here.

What might Google’s algorithms be doing? It should be easy to make the argument that AC/DC’s song is more culturally significant than Linkin Park’s song: one was a hit single and the other was not. AC/DC is also a bigger band than Linkin Park with the former selling many tens of millions of albums more than the latter. Linkin Park has certainly been more active and relevant in the last two decades, so perhaps that’s why it is receiving preference.

Well, whatever… the point is Linkin Park sucks a fatty compared to 70s-era AC/DC, make no bones about it. If Linkin Park was somehow supposed to usurp the claim to the “High Voltage” song title then the band failed miserably, despite Google favoring it. By the same token, if any other band is ever going to try to build a stronger association between that song title and their band name then they really have their fucking work cut out for them.

It’s also worth noting that Google isn’t meritocratic in its search results—give people what they want and not what they need (yes, you really do need Bon Scott’s AC/DC). Meanwhile, bury the splendidness of the past if it’s less likely to make a buck in the present.

I had to reset my Android smartphone recently because it developed a number of strange issues, like group-text messages taking 30+ seconds to send, and apps consuming a bunch of storage space even after they were uninstalled. In the past, I had the autocorrect typing feature disabled because I found that it created more problems for me than it solved, but it was turned back on since the feature is enabled by default and the phone reverted back to all of its default settings.

For shits and giggles, I decided to leave autocorrect on for a while so that I could assess how effectively its correction and prediction algorithms complement the user experience. To put it another way, I left it on so I would have an opportunity to better understand how well it works—or how well it doesn’t work, depending on one’s point of view.

I soon discovered a notable peculiarity of the word prediction feature: it frequently exhibits a preference for words relating to nerd culture

over common English words. This came to my attention while having a text-based conversation with a friend via Skype. I accidentally typed “Luke” when I intended to type “Like”. This is a common mistake that is impossible for the algorithm to correct: the letter “u” is adjacent to the letter “i” on a standard keyboard, and “Luke” is a valid word/name, so what could it possibly do?

What surprised me though was that I found “Skywalker” appearing as the second of three word predictions offered by the algorithm, alongside the much more common English words “and” and “is”: 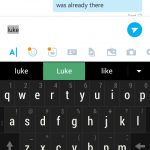 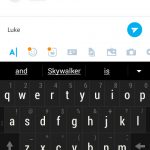 Suppose I was actually talking about a person named Luke—is it really okay that “Skywalker” is recommended over “was” or “would” or any other sentence-building words?

At first I wondered if society as a whole has become so strongly affected by pop-culture that the algorithm was actually correct in its prediction—that is, after typing the name “Luke”, people have been found to type “Skywalker” more frequently than “was” or “would”. If this is the case then that would mean there are more nerds on the planet in 2017 than non-nerds. Could this actually be true? Well, probably not… at least not yet. What’s more likely is that there is some mischievous programmer on the Android team at Google with a Darth Vader costume and large collection of battery operated light sabers who is having some fun at the expense of the rest of us.

I am not a fan of Star Wars and so I was quite irritated at this point. I started to wonder how much cumulative time might be lost by Android users because word prediction promulgates pop-culture instead of favoring utility. Google claims that there are more than 2 billion Android devices in use

, so if each person lost on average 2 seconds every day while texting due to biased and incorrect word suggestions then there would be ~46,296.3 days worth of lost time across the world every 24 hours.

I decided to test a few more words and names that have been assembled by the nerd-collective—“Mario”, “final” and “walking”. These were the results: 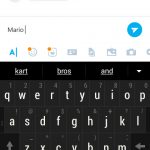 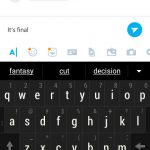 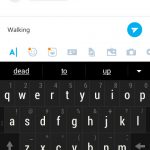 , and also one more reason for me to hate Star Wars

. Oh… and I don’t hate either as much as I hate the Church of Jedi

—these people would totally do something like this. I think we should lure all of these nutjobs into a space shuttle resembling the Millenium Vulcan and then shoot them into the darkest corner of space. (Perhaps this sounds cruel, but honestly… they would probably be okay with it.)

Needless to say, I have turned auto-correct back off. 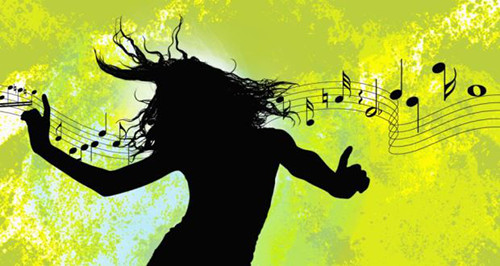 There are eight companies currently vying for control over the new gTLD (generic top-level domain) .music. Here they are sorted in alphabetical order by parent company—not by the subsidiary that submitted the application:

On a somewhat related note, the .game gTLD is owned by Uniregistry, Corp

while the .games gTLD (note the addition of an ‘s’) is owned by Donuts through its Foggy Beach, LLC. The costs for a domain from these companies are about $500 and $15 per name per year, respectively, so I guess Uniregistry gets to mark up its names by 3333% for having a gTLD that is only one letter shorter.